Whole Grain Buttermilk Waffles are the best waffles with additions of whole wheat flour and buttermilk to create a tender waffle with a crisp exterior.

March 25 is International Waffle Day! Waffles are eaten all over the world as sweet or savory treats. On this food holiday, make your favorite waffle recipe, toast some frozen waffles, or order waffles at a restaurant. If you are looking for something new to try in your waffle iron, make these Whole Grain Buttermilk Waffles. Share your waffle celebration on social media by using the hashtag #InternationalWaffleDay or #WaffleDay.

The History of Waffles:

Waffle-like food originates back to the middle ages where batter was cooked between two metal plates over a fire to create “flat cakes.” By the 14th century, a grid pattern was added to those plates to create the honeycomb pattern that waffles have today.

In 1789, Thomas Jefferson brought a long-handled waffle iron to the US. And on August 24, 1869, Cornelius Swarthout received the first US patent for the waffle iron (cooked over a fire). We celebrate National Waffle Day on August 24th!

If you make waffles for a lot of people, it’s helpful to have a waffle iron that you can turn and make two waffles at once. While one waffle is cooking, you can take the other one out, give it to a hungry eater, and get batter poured into the other side. Black and Decker makes a good, moderately priced “flip” waffle iron. If there are just two of you in the house, I recommend the Cuisinart Waffle Maker. It’s smaller and easier to store.

These Whole Grain Buttermilk Waffles are made just like regular waffles. The batter is combined, and then it’s spooned into a hot waffle iron. Cook until browned and crisp on the outside.

These waffles turn out so perfect and delicious.

How to freeze waffles:

If you make extra waffles, freeze the extras! Just pop them into a freezer zip baggie and store in the freezer for up to 3 months. Any longer than that, and they’ll begin to develop unwanted ice crystals. When the mood strikes for a waffle, just place your frozen waffle in the toaster and toast until it’s all warmed up and crisp.

In a separate bowl, whisk together the buttermilk, eggs, butter and vanilla.

Add the wet ingredients to the dry, and stir to combine.

Spoon the batter into the waffle iron, and cook until done- usually 3 to 5 minutes. 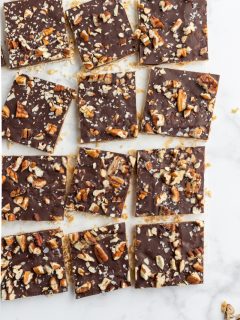