Sticky Bun Popcorn is the best way to turn popcorn into dessert. Fluffy popcorn and pecans are coated with a sweet cinnamon syrup.

January 19th is National Popcorn Day! It’s a great day to eat popcorn and celebrate. Go to the movies and eat a giant bag of popcorn, pop popcorn on the stove at home, make popcorn balls or try making this sticky bun popcorn (the best!) Share your popcorn on social media today by using the hashtag #NationalPopcornDay, #PopcornDay and #RecipesForHolidays. Be sure to follow our January Food Holidays page so you never miss a food holiday in the month of January!

The History of Popcorn:

The first evidence of popcorn was in Peru in 4700 BC. Corn cobs were discovered that were studded with puffed kernels.

When people first enjoyed popcorn as a snack, dried kernels were cooked and they were much like corn nuts.

In 1875, Frederick J. Myers patented a corn-popping device with a stay-cool handle that was used over a fire.

In the 1800’s Charles Cretors invented a lightweight electric machine that popped corn in oil. This was great for popcorn vendors who needed to pull a cart to sell in different areas. 8 years later he added a feature that would butter and salt the popcorn too. Cretors is credited with being the inventor of popcorn.

In the 1880’s, the 1st popcorn brands emerged (Big Buster and Little Buster was one of them).

In 1896, Cracker Jack hit the scene. It was a crunchy popcorn with salty peanuts coated in molasses.

Initially, popcorn venders sold popcorn at street fairs, festivals and sporting events. During the 1920’s, popcorn vendors began setting up outside movie theaters- which were becoming very popular with Americans. Popcorn eventually became popular to sell as a snack while watching movies.

During the Great Depression, popcorn became an “affordable luxury” at 5 to 10 cents per bag. Unlike other products, popcorn sales actually increased during the Depression because of high attendance at movie theaters.

How to make Sticky Bun Popcorn:

The full, printable recipe is at the end of this post. Preheat the oven to 350 degrees, and line two rimmed baking sheets with parchment paper.

Follow the directions in the recipe to pop the popcorn in a pan. Then transfer the popped corn to a bowl and add the pecan halves.

Follow the directions in the recipe to make the gooey cinnamon caramel syrup. Then pour the syrup over the popcorn and pecans in the bowl. Toss to mix well.

Spread the coated popcorn and pecans on the prepared baking sheets. Bake for about 20 minutes until the nuts are toasted and the popcorn is crisp.

Let the popcorn cool and then break it apart into clusters to serve. Sticky bun popcorn can be stored in a sealed container at room temperature for up to one week. Enjoy!

This recipe for sticky bun popcorn comes from the cookbook: Pastry Love by Joanne Chang. It’s full of Chang’s favorites from her Flour Bakeries. There are plenty of recipes in the book for things like croissants, cakes, cookies, muffins and more. And what could be better than turning regular popcorn into sticky bun popcorn?

Nutritional information is figured using a nutrition calculator. It is not likely to be 100% accurate. 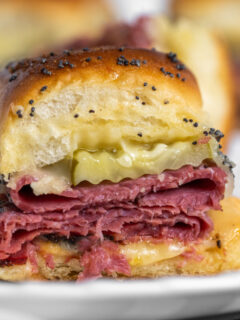 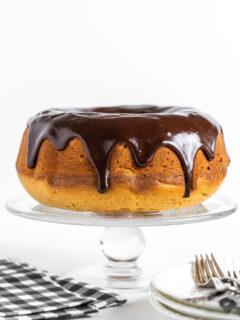 I'd like to add a few chocolate chips. Would you recommend after it comes out of the oven?

Sure, you can try!