Baked Glazed Doughnuts are a “healthier” version of their fried counterpart. They’re baked vanilla doughnuts double-dipped with vanilla glaze. Be sure to watch the video in the recipe card at the end of this post to see how to make this recipe!

January 12th is National Glazed Doughnut Day! It’s a day to enjoy making your favorite doughnuts or support your local doughnut shop. Americans consume 10 billion doughnuts per year, so you can bet that pretty much everyone is excited about a day devoted to glazed doughnuts.

How the doughnut got its name:

Dutch settlers brought “olykoeck” (oily cake) to New York as early as the 1600’s, and that launched the concept of the deep fried pastry. It’s tough to say how the doughnut got its name. Some say that the dough was often tied into knots before frying (dough-knot). And others say that there were nuts involved (dough-nut).

Glazed doughnuts are a simple sort of doughnut. They’re typically cut donut rounds with a hole in them, fried in oil and then covered with glaze. Our glazed doughnuts here are baked instead of fried. So make some of these doughnuts today to enjoy with the rest of your breakfast!

How to make Baked Glazed Doughnuts:

Because these doughnuts are baked, they have more of a “cake” texture, so they’re made with cake flour. You’ll end up with a buttermilk- vanilla batter.

The batter is piped into a doughnut pan . It’s easiest (and cleanest) if you use a piping bag for this.

How the doughnut got its hole:

American Hansen Gregory claimed to have invented the donut with a hole in it in 1847 when he was traveling by steamboat. Rumor has it that he wasn’t happy with the texture of the center of the doughnut so he pressed a hole in the center. Others say that he strung his round doughnut through a pole on the ship so he could use two hands to steer the ship.

It only takes 7 to 9 minutes for these glazed cake doughnuts to bake, and they will rise up beautifully, keeping that hole in the middle!

Move them to a cooling rack. You’ll want to glaze them right away because these doughnuts are best when eaten the day they are made.

The glaze is a simple mix of powdered sugar, heavy cream and vanilla extract. Whisk that all together and dip the tops of these doughnuts in the glaze. Dip them again to create a double layer of glaze! And then you will have 12 of the best baked glazed doughnuts ever!

Since today is only focused on celebrating glazed doughnuts, you can look forward to the first Friday in June, which celebrates National Doughnut Day (all doughnuts!)

Preheat the oven to 425 degrees F. Spray a doughnut pan with nonstick spray.

Bake for 7 to 9 minutes, or until the tops of the doughnuts spring back when touched. Let the doughnuts cool in the pan for 4 to 5 minutes before removing them to a rack.

These doughnuts are best when they are fresh. So let them cool some and then add the glaze. In a medium bowl, whisk the glaze ingredients together. Dip the tops of the doughnuts in the glaze and then set them on a rack to set the glaze. Then go through and dip them a second time (double dipping!) and set them on the rack again. Serve soon after glazing- as soon as the glaze is set.

Nutritional information is estimated and is likely not 100% accurate. 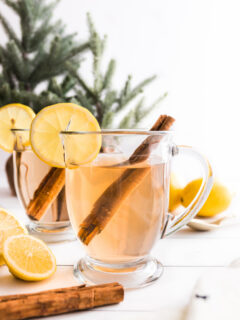 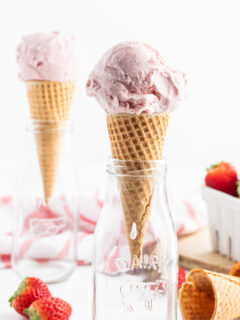 Are these able to be frozen?

I have not tried freezing these.