Creamy and delicious, this is an easy 30 Minute Macaroni and Cheese recipe with a secret ingredient.

July 14th is National Macaroni and Cheese Day! Celebrate by making this awesome recipe for 30 Minute Macaroni and Cheese! If you have another favorite mac and cheese recipe, it’s okay to use that too. Or you could even make the stuff in the box! Share your mac and cheese indulgence on social media by using the hashtag #NationalMacaroniAndCheeseDay, #MacaroniAndCheeseDay #MacAndCheeseDay and #RecipesForHolidays. Be sure to check out my July Food Holidays page so you can follow all of the food holidays for the month of July.

The History of Macaroni and Cheese:

Pasta and cheese casseroles were recorded as far back as the 14th century in an Italian cookbook. Those versions contained pasta with Parmesan cheese.

The more modern take on macaroni and cheese appeared in the 1770 cookbook: The Experienced English Housekeeper. That recipe called for béchamel sauce made with cheddar cheese, mixed with macaroni, topped with Parmesan cheese and baked.

How to make 30 Minute Macaroni and Cheese:

Cook the pasta in a boiling pot of salted water. Shells are a good pasta for macaroni and cheese because they have a built-in pocket for holding onto the sauce.

While the pasta is cooking, make the cheese sauce. Warm milk and unsweetened pumpkin puree in one pan until hot. The pumpkin helps to provide a creamy, velvety texture, but it does not add a ton of pumpkin flavor.

In a separate pan, melt the butter and whisk in the flour. Cook until lightly browned. Whisk in nutmeg and the hot milk mixture. Then whisk in Gruyere cheese, cheddar cheese, salt and pepper. Stir until melted.

Add the cooked pasta to the cheese sauce.

Stir until all of the pasta is coated with the wonderful sauce.

This recipe comes from The Secret Ingredient Cookbook by Kelly Senyei. This new cookbook focuses on adding a “secret ingredient” to each recipe that enhances the flavor. There are 125 family-friendly recipes in the book. Recipes that have caught my eye: Sweet and Savory Egg Sandwiches, Pumpkin Waffles with Maple Whipped Cream, Sweet and Tangy Baked Chicken Wings, Sweet Heat Pepperoni Pizza, Fettuccine Alfredo with Lobster, French Onion Steak Sandwiches, Boozy Iced Coffee, Caesar Pasta Salad and Funfetti Celebration Cake. This is a cookbook you’ll want to add to your collection. There are lots of recipes worthy of making again and again!

Fun Facts about Macaroni and Cheese:

Nutritional information was figured using a nutrition calculator. It's not likely to be 100% accurate. 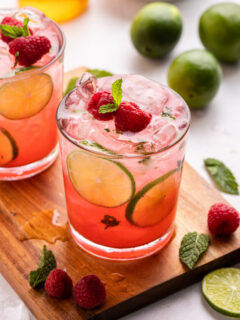 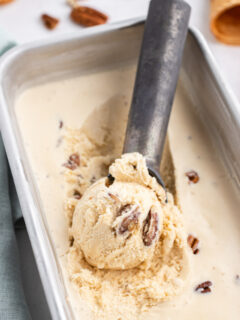